As 2019 comes to an end, we’re delighted to announce that Project Pressure has been selected as one of four featured projects in the 2020 edition of the prestigious Landskrona Foto Festival.

Chosen from 888 applications representing 68 countries as part of an open call, Project Pressure’s work will be a keystone exhibit at the festival, shown alongside works by photographers Lesia Maruschak, Emily Graham, and Rodrigo Orrantia.

An annual event hosted in Skåne, south Sweden, the Landskrona Foto Festival transforms the region into a thriving home for photography in Scandinavia. The next edition of the festival takes place in September 2020 and will be themed around memory – an event dedicated to exploring the phenomenon’s role in the construction of reality, as well as the social impact of collective memory.

Project Pressure’s inclusion in the event is an important acknowledgment of the urgency of the charity’s mission. Earth’s threatened landscapes are our greatest store of collective memory, while the importance of recognising and responding to rapid changes in our environment has never been more pressing. We’re delighted to have been chosen to exhibit in the the Landskrona Foto Festival, and look forward to welcoming you to Skåne in September 2020.

Meltdown in The Observer 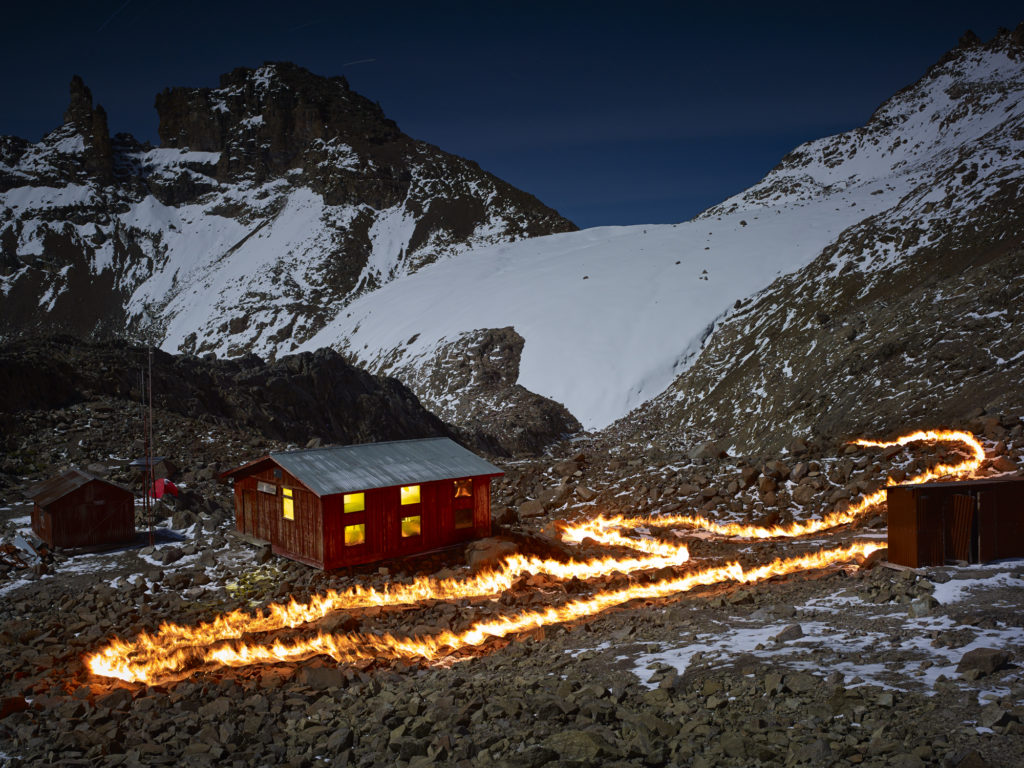 “‘What is it about those melting glaciers and desperate polar bears that makes us want to look away?” the activist and author Naomi Klein asked in 2015. In her book This Changes Everything, she laid the blame on powerful global corporations and acquiescent governments, which both simultaneously underplay the scale of the climate emergency and exploit our collective sense of helplessness in the face of it. Since then, a new urgency has driven climate activism, most successfully in the disruptive protests of Extinction Rebellion. Can art, though, have a meaningful role in raising awareness of that urgency?

A forthcoming exhibition, Meltdown: Visualising Climate Change, at the Horniman Museum in London sets out to answer that question in the affirmative. It focuses on the fate of the world’s glaciers through the prism of art, photography and film. “We are using art as a kind of seduction to draw people in, then shock them,” says photographer Simon Norfolk, one of the artists involved.”

Sean O’Hagan has kindly written about our upcoming exhibition in The Observer. Read the full story here

Exhibition opening the 28th of Nov at the Horniman Museum and Gardens, London.

MELTDOWN at The Horniman – Opening Nov 28 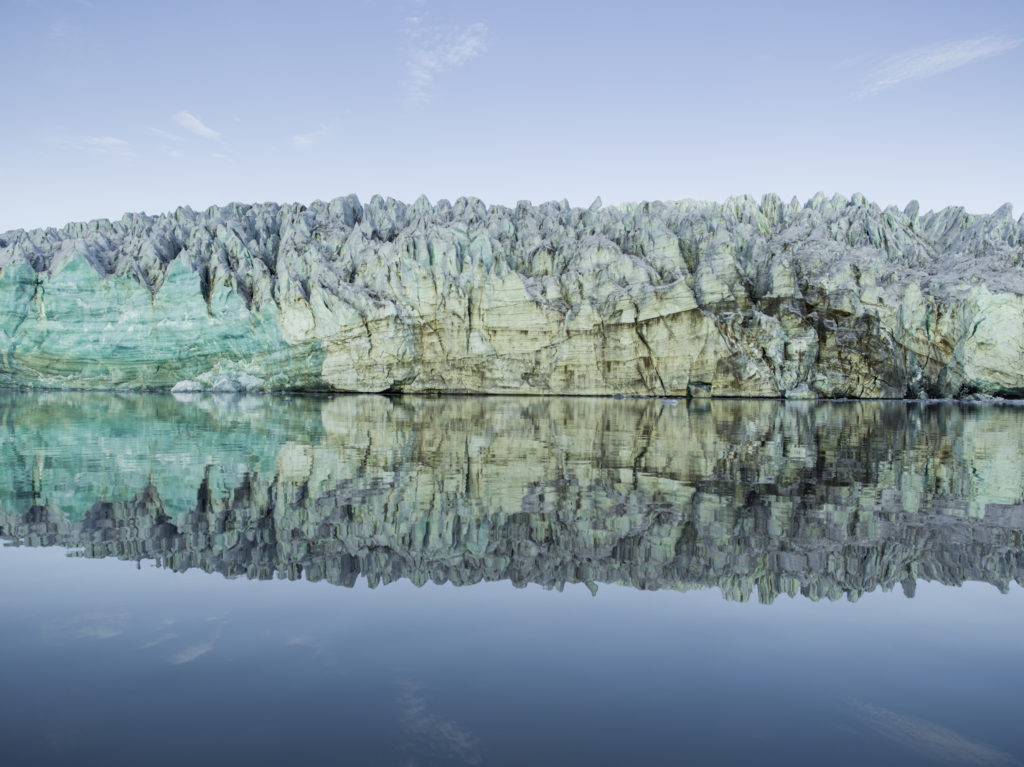 MELTDOWN – Visualizing the Climate Crisis by Project Pressure emphasises the importance of glaciers in a scientific, illustrative and dramatic way. The upcoming show at The Horniman Museum and Gardens, London features work from every continent, leading the viewer on a journey in three chapters – The Importance of Glaciers, Current Issues and Meltdown Consequences.

Since 2008 the climate crisis charity Project Pressure has been commissioning world-renowned artists to conduct expeditions to document changes to the world’s vanishing glaciers, the consequences for billions of people, and efforts made to limit melting.

The works featured from these expeditions range in scale from the planetary level to microscopic biological impact, with artistic interpretations giving unique insights into the world’s cryosphere, its fragile ecosystem and our changing global climate.

“Voices for the Future – was a compelling visual prelude to the Climate Action Summit that combined a visual depiction of climate change, a collapsing iceberg, with the voices of six young people expressing their expectations and demands for a future in which leaders rise to the challenge through climate action. Art is a great medium that crosses the boundaries of language and culture as did Voices for the Future.”      – Luis Alfonso de Alba, Secretary-General’s Special Envoy for the 2019 Climate Action Summit.

VOICES FOR THE FUTURE – an immersive art installation by New Zealand-based artist Joseph Michael, produced in collaboration with environmental charity Project Pressure lit up the United Nations General Assembly and Secretariat buildings in New York leading up the UN’s Climate Action Summit and coincided with the global school strikes on Friday the 20th of September.

The installation of large-scale projections covering the outside of the UN with images of a massive iceberg, set the scene for the voices of six young advocates, authored by Klaus Thymann, including Swedish student activist Greta Thunberg, commenting on the nature of the climate crisis and urgent actions that can, and must, be taken to minimize the consequences of climate change. 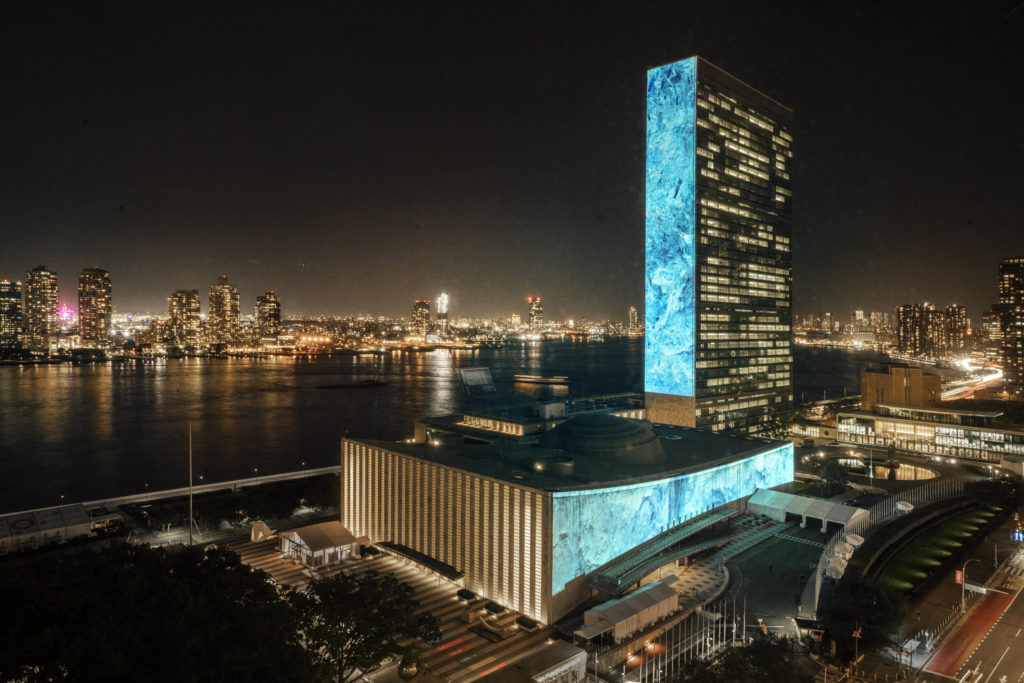 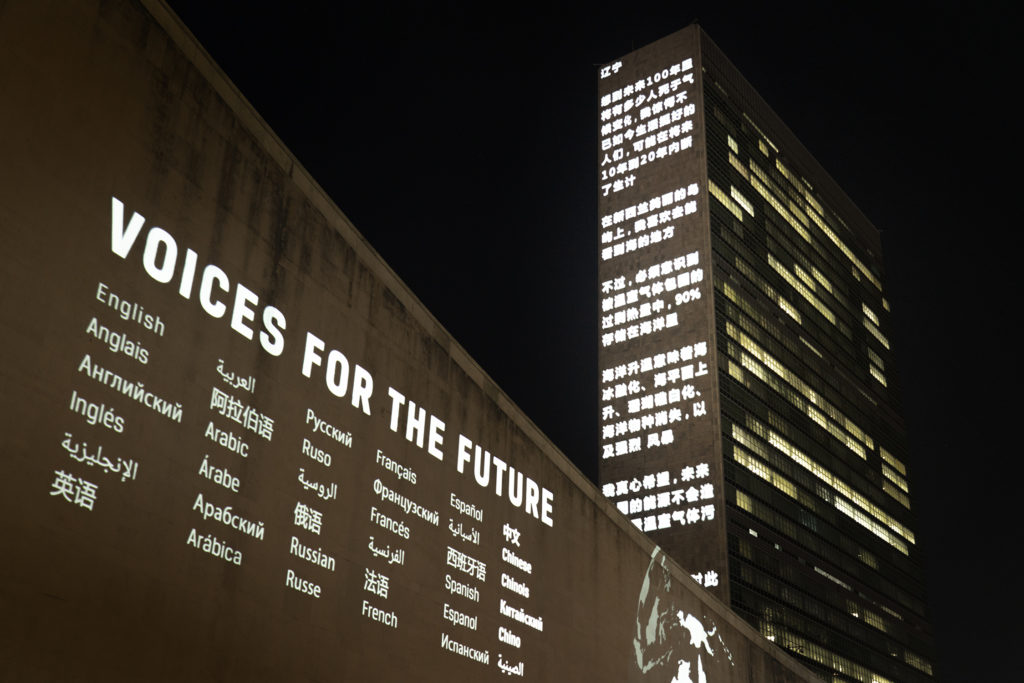 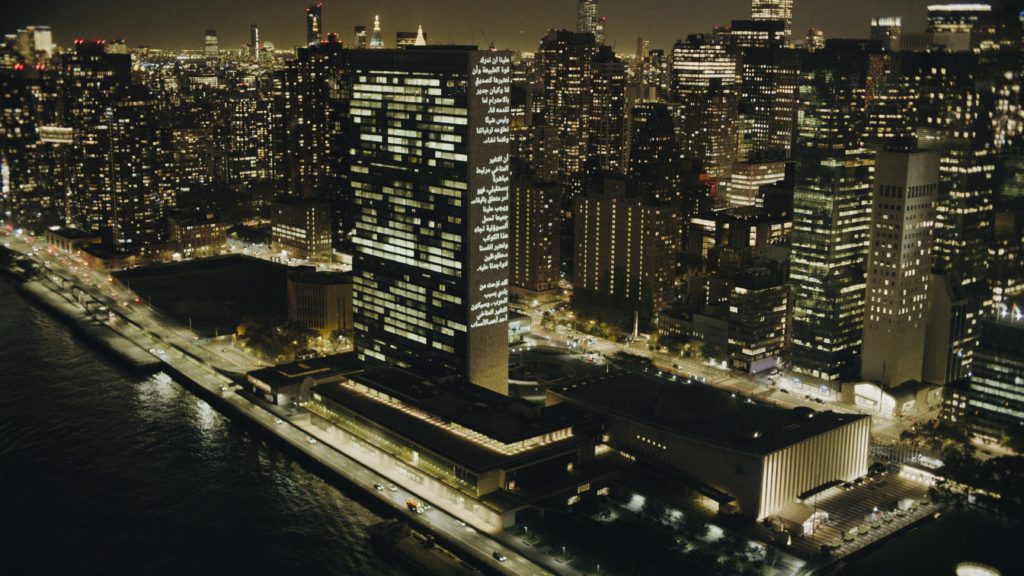 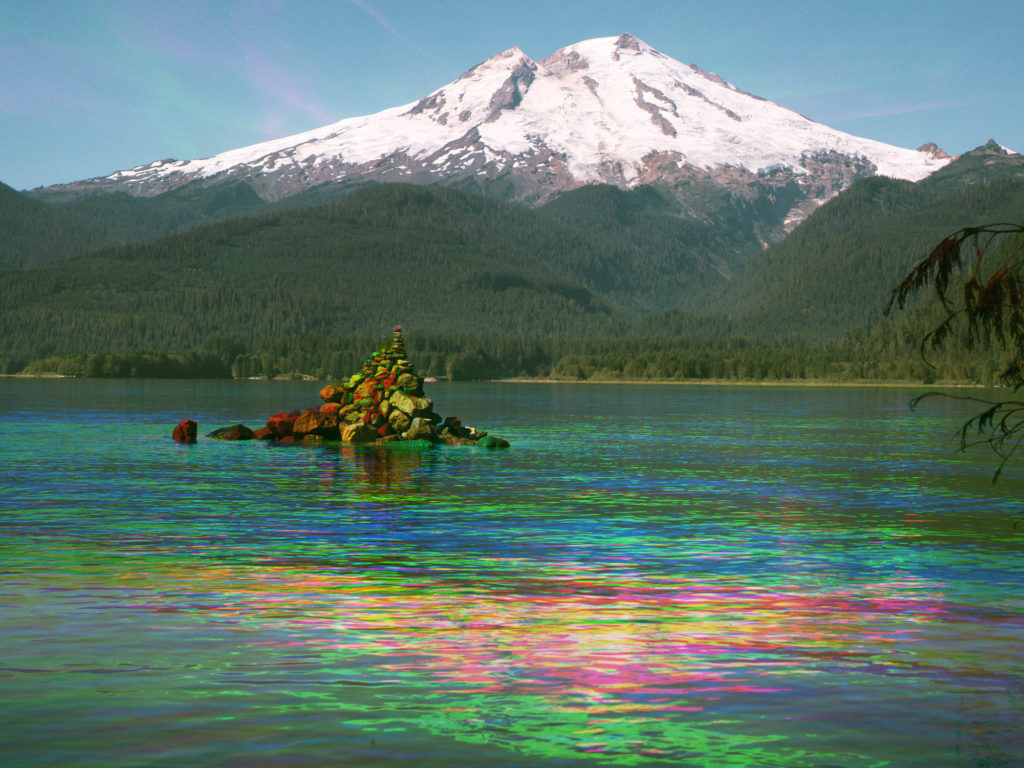 Alt. +1000 photo festival in Switzerland is renowned for exhibitions of contemporary photography with mountain themes. Whether by climbing mountains, building roads and parking lots, planting a cross, or working the steep land, humans have left their mark on the landscape for centuries and this footprint is at the centre of the fifth edition of the Alt. +1000 festival.

WARNING SIGNS by Project Pressure will be exhibited in and around Lake Taillères, the centre of the “Siberia of Switzerland”. The exhibition consists of nearly 80 images – a combination of stunning artworks and an informative poster campaign visualizing the climate crisis in an inspiring way. The event offers art and nature lovers, as well as fa­milies, a photographic stroll through a remarkable landscape.

In addition to Lake Taillères, the festival takes place at two other magnificent sites – the Grand-Cachot-de-Vent farm and the Musée des beaux-arts Le Locle (MBAL) where visitors can enjoy 80 years of mountain images by Magnum photographers, as well as a solo exhibition by Project Pressure collaborator Noémie Goudal among other works.

Sponsored by the Swiss Federal Office for the Environment. 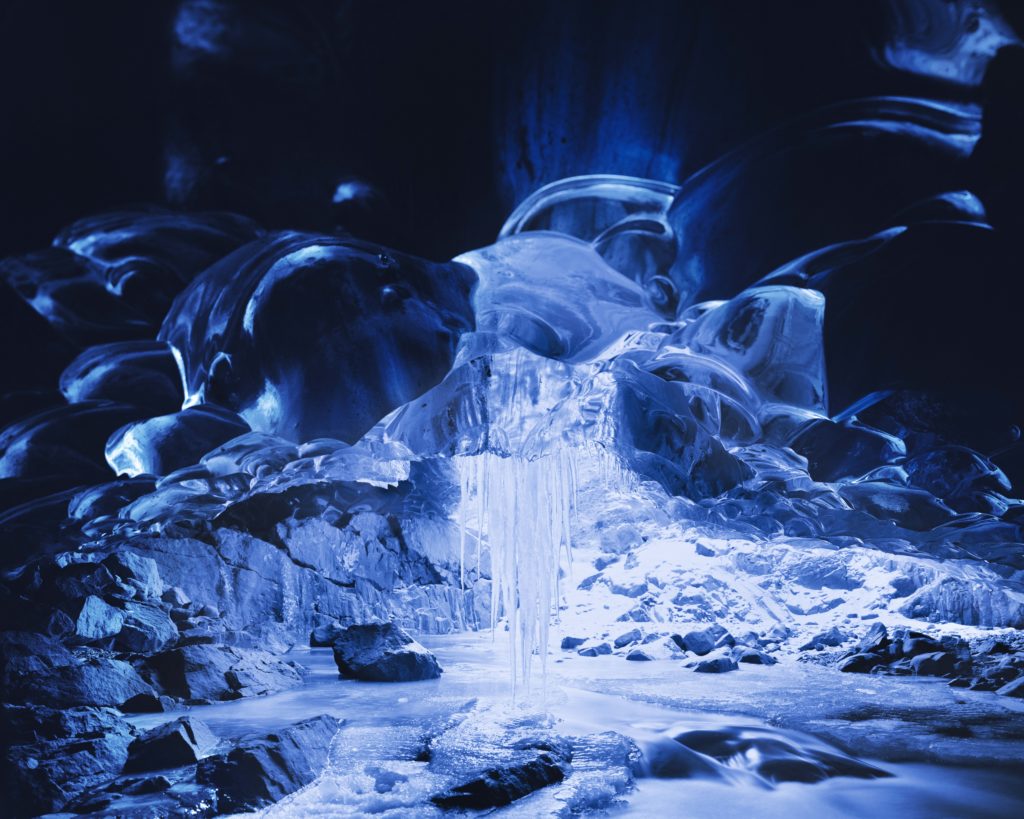 MELTDOWN featured in The Guardian with a selection of artworks from the entire exhibition at The Natural History Museum in Vienna. The show is open until the 1st of September. 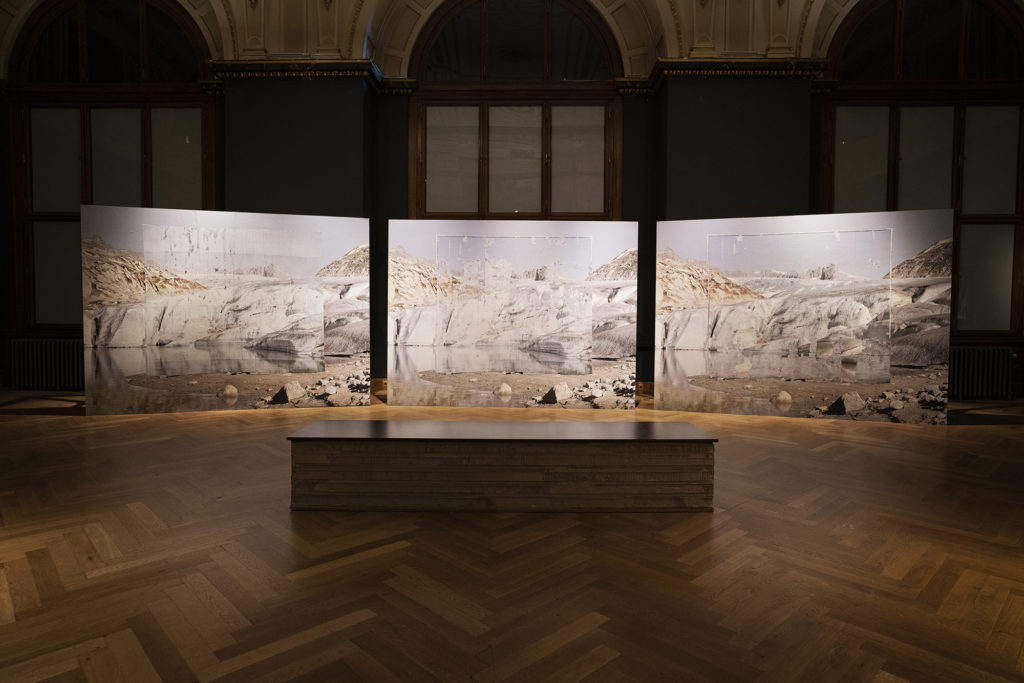 Opening hours and information about how to get there here. 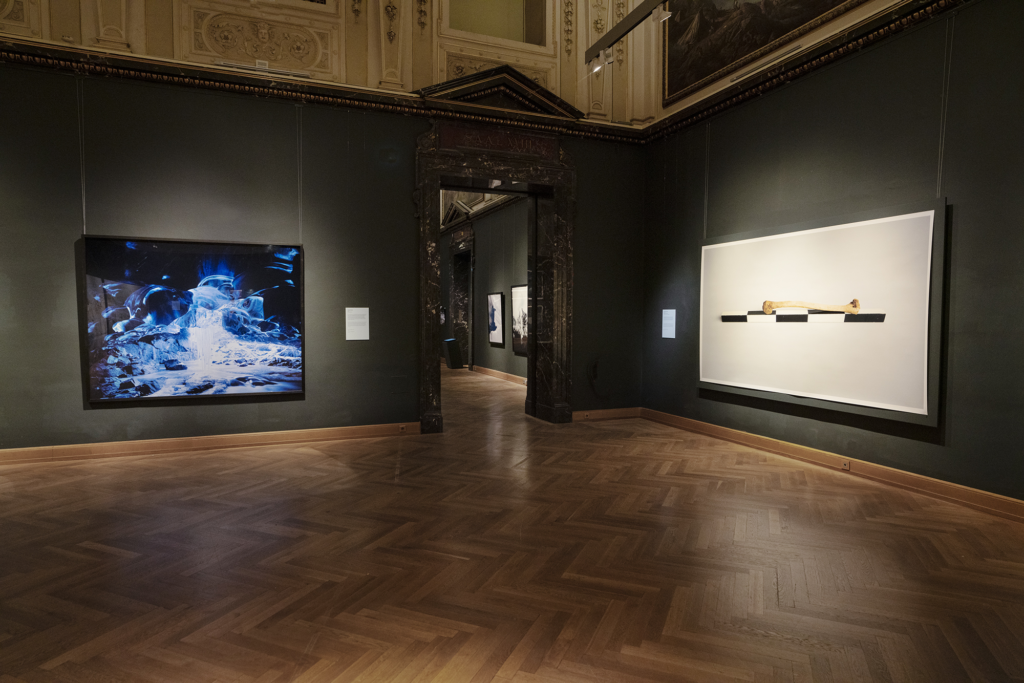 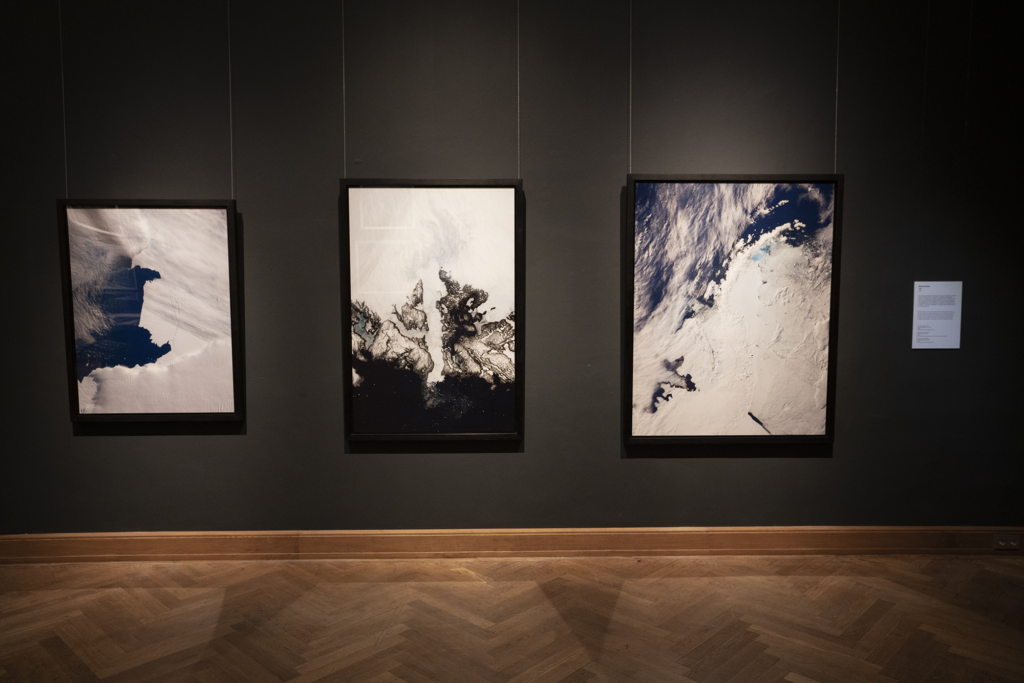 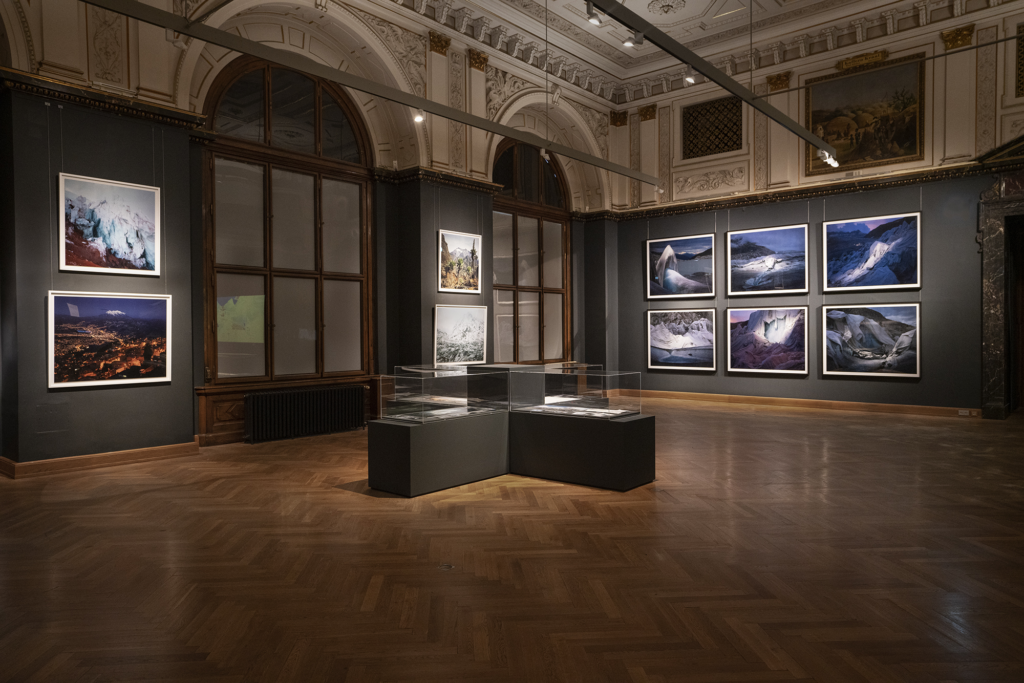 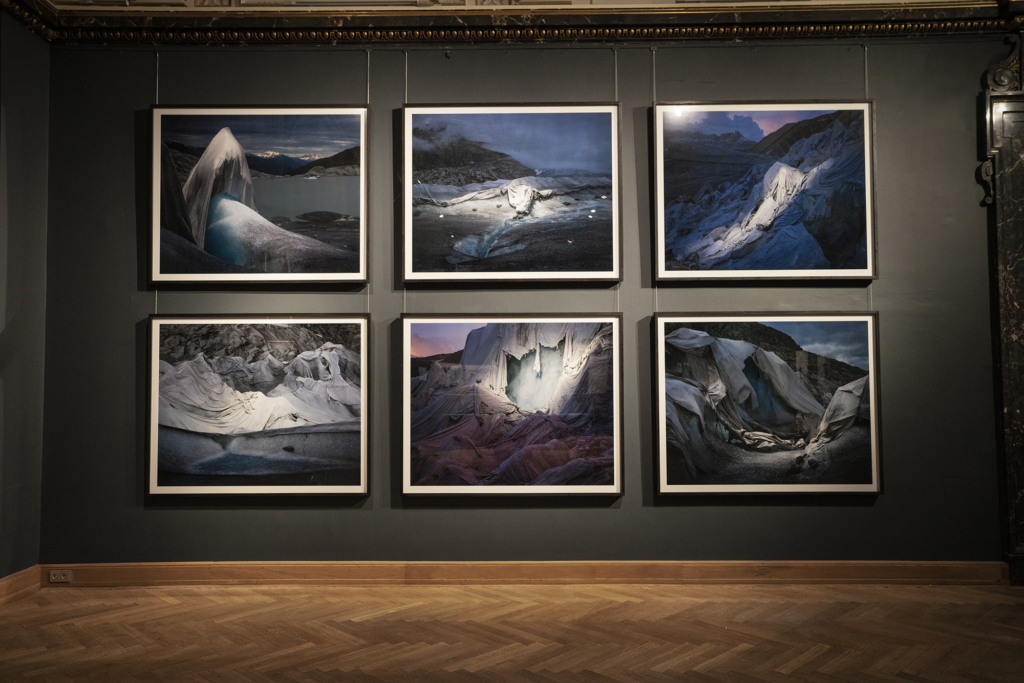 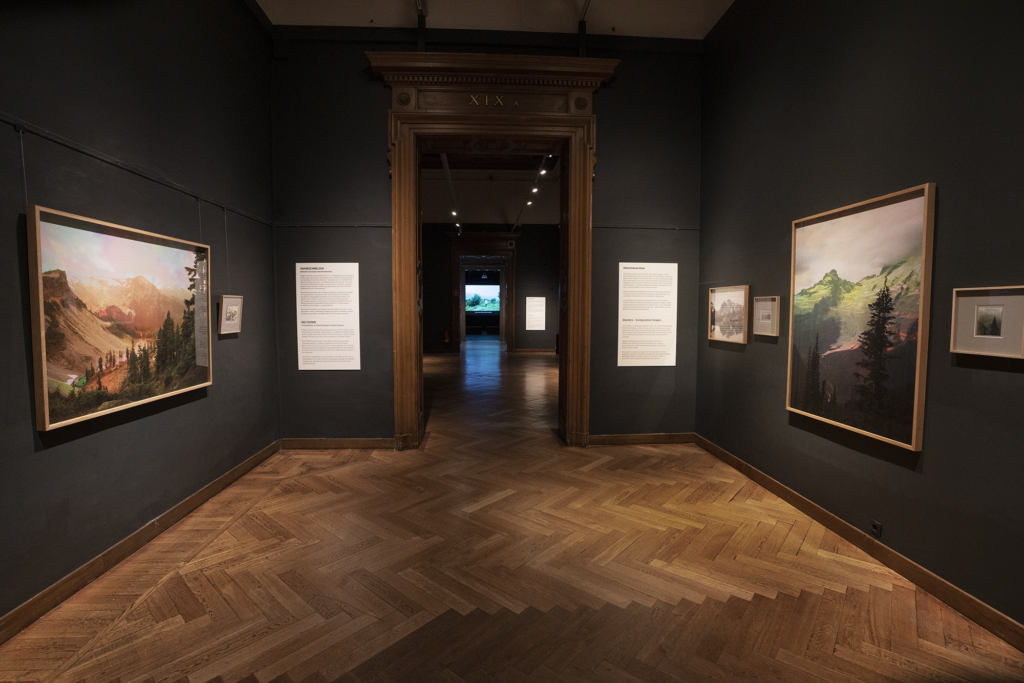 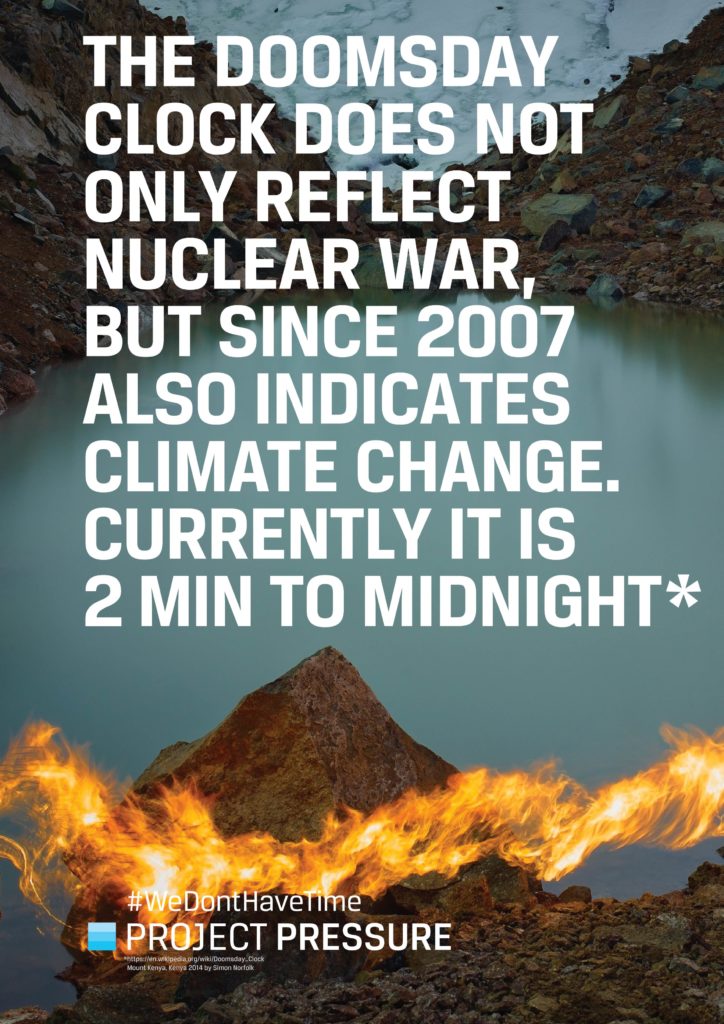 The aim of Project Pressure is to visualize climate change, using art as a positive touch point to inspire engagement and create behavioural change. The posters launched on Earth Day 22nd of April relate to vanishing glaciers to demonstrate the impact of climate change. Unlike wildfires, flooding and other weather events, glacier mass loss can be directly attributed to global climate change, and as such they are key indicators.

The images by Corey Arnold, Edward Burtynsky, Simon Norfolk and Klaus Thymann are overlaid with surprising facts, providing an informative and unexpected journey for the viewer. 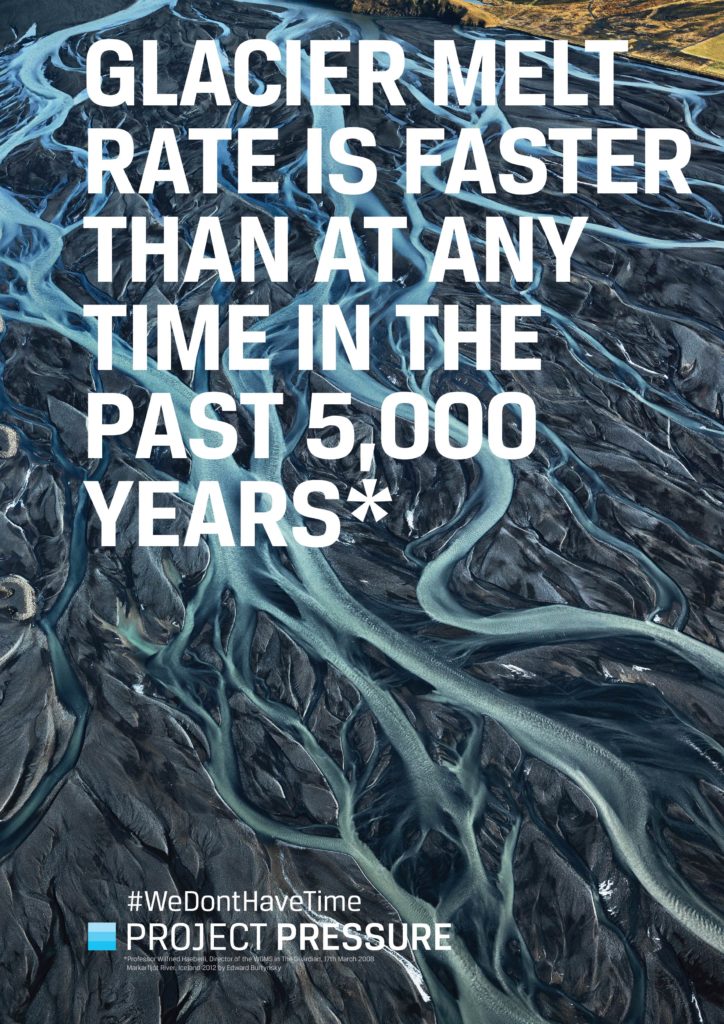 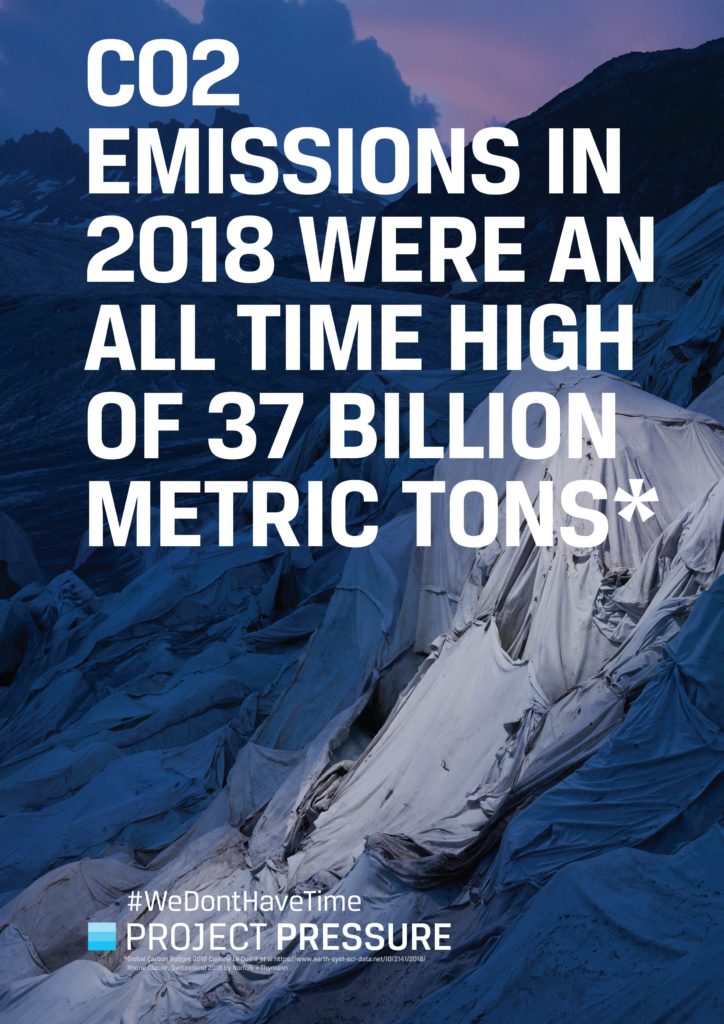 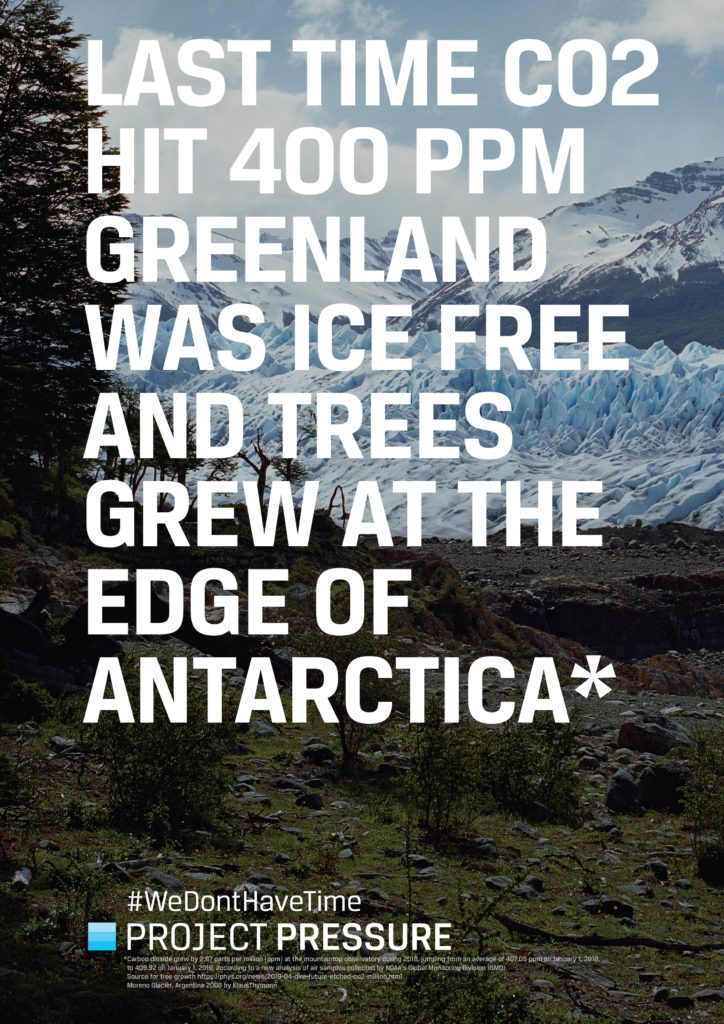 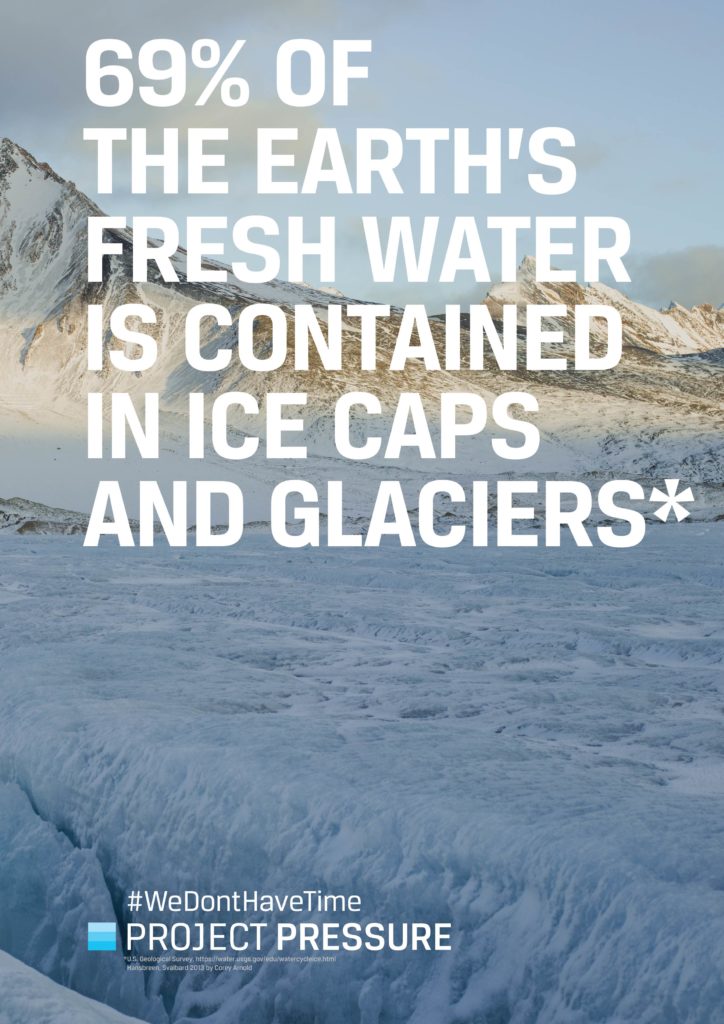 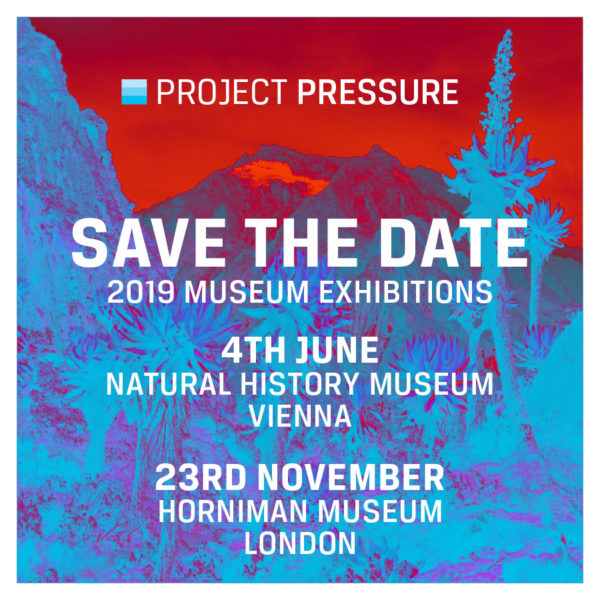 MELTDOWN – a visualization of climate change by Project Pressure

Since 2008 Project Pressure has been commissioning world-renowned artists to conduct expeditions around the world, and for the first time these works will be shown together as MELTDOWN, a travelling exhibition premiering at the Natural History Museum, Vienna.
Project Pressure uses art as a positive touch point to inspire engagement and behavioural change. The selected artworks in MELTDOWN relate to vanishing glaciers, to demonstrate the impact of climate change through various media. Unlike wildfires, flooding and other weather events, glacier mass loss can be 100% attributed to global temperature changes and as such, they are key indicators of climate change.
The exhibition is a narrative of the importance of glaciers told in a scientific, illustrative and poetic way and each artist has a unique take on the subject. MELTDOWN shows scale from the planetary level to microscopic biological impact, and considers humanitarian suffering and more. Together the artistic interpretations in MELTDOWN give visitors unique insights into the world’s cryosphere, its fragile ecosystem and our changing global climate.
Featured artists are: Corey Arnold (US), Michael Benson (US), Adam Broomberg (ZA) & Oliver Chanarin (UK), Edward Burtynsky (CA), Scott Conarroe (CA), Peter Funch (DK), Noémie Goudal (FR), Adam Hinton (UK), Richard Mosse (IE), Simon Norfolk (NG), Christopher Parsons (UK), Toby Smith (UK) and Klaus Thymann (DK).
The second stop for our travelling show will be Horniman Museum and Gardens, London, opening the 23rd of November. More information to follow.