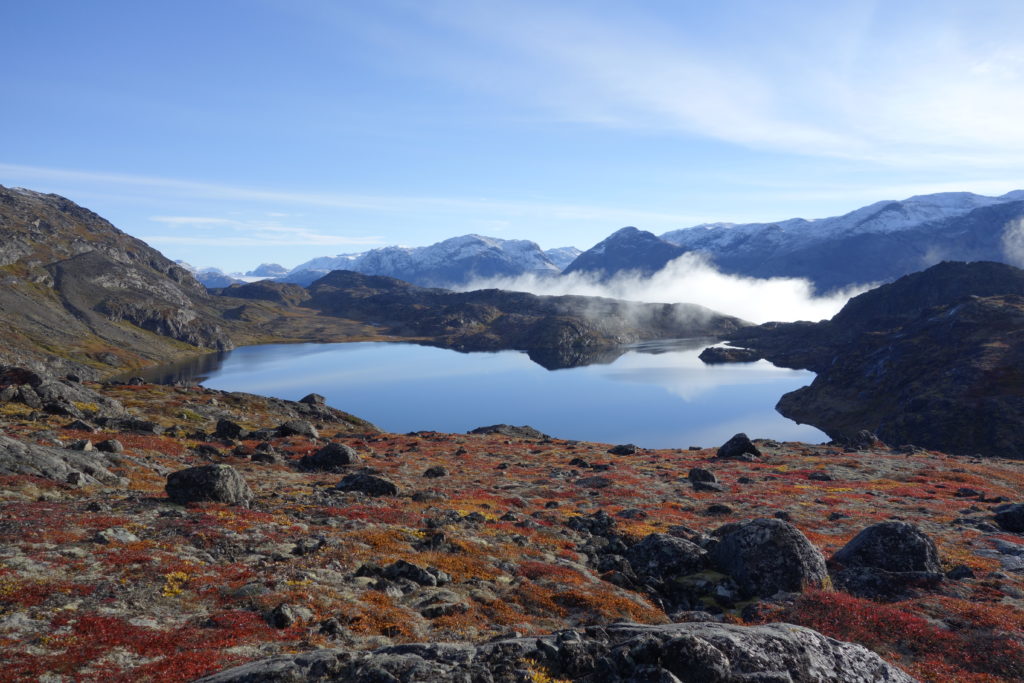 Artists Mariele Neudecker and Klaus Thymann have recently returned from a collaborative project to detail the glaciers surrounding Narsarsuaq in Southwest Greenland. This area was chosen due to the dramatic examples it provides of tidewater glaciers, where the ice meets the ocean, thereby allowing the team to document the impressive scenery through photography and video.
It is also a disconcerting example of the devastating affects climate change can have; the Greenland ice sheet has been losing mass since, at least, the early 1990s , at rates that seem to be progressively increasing. (Rignot and Kanagaratnam, 2006; Thomas and others, 2006; Velicogna and Wahr, 2006)
The team arrived in Narsarsuaq, from where they travelled by boat around the peninsula into Qoroq bay to document the ice fjords of Mellemlandet. There was a thin layer of ice on the water’s surface; as it approaches winter sea-ice-minimum has been reached and the artic ice starts increasing. The inlet of the fjords is also extremely hazardous as it is pitted with icebergs of all shapes and sizes.
From the water they studied Qorqup glacier, this area has been considerably well monitored over the last two decades; research has shown significant retreat from Qorqup, as well as growing ice rifts causing the glacier to thin.
The expedition continued as the fog, rain and wind swept in and the artists started on a six-hour trek to Kiagtut glacier. Each of the group maintained communication with whistles as visibility got down to approximately 5 meters. Using compasses and GPS systems were the only way to guarantee moving in the correct direction.
After camping over night the artists continued via helicopter to Eqalorutsit glacier west of Narsarsuaq – staying near viewpoints that enabled spectacular views of the glacier terminus both during the day and at night. The glacier runs through Sermilik Fjord carving a valley that allows for beautiful panoramic views of the ice and water juxtaposed by the baron Greenlandic landscape.
After spending some days observing the glacier the team returned to Narsarsuaq. Although only touching on the issue of Greenland’s ice sheet recession this expedition has allowed the artists to observe some of Greenland’s impressive glacial formations that will be interpreted as unique artwork to be preserved as part of Project Pressure’s archive.
The still and moving imagery will also be added to the open source MELT platform currently in development; see the beta version here.