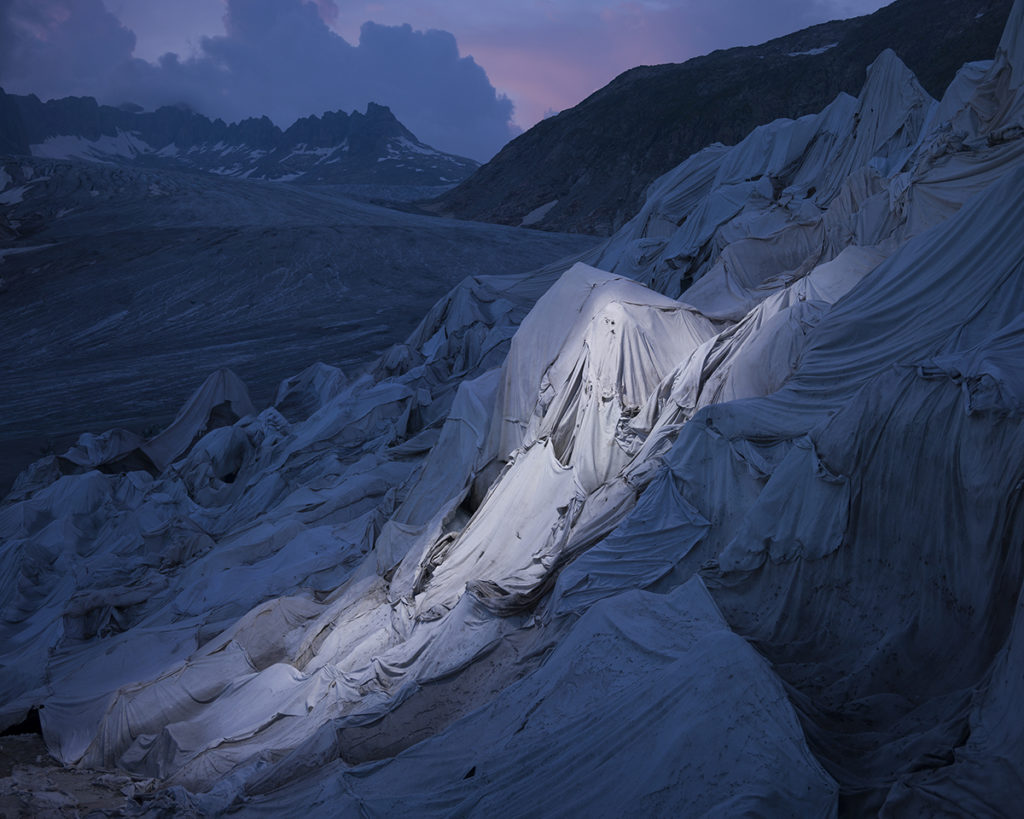 Review of Project Pressure’s exhibition When Records Melt in the New Scientist magazine.
“Visit the Rhône Glacier in southern Switzerland, and you are more than likely to wander past a small shop. It’s worth a visit: the owners have carved out an ice grotto, and charge tourists for the eerie and beautiful experience of exploring the inside of their glacier’s mass of blue ice.
Now, though, it’s melting. The grotto is such an important part of their livelihood, some years ago the owners invested 100,000 euros in a special thermal blanket. “It’s kept about 25 metres’ depth of ice from disappearing and has kept the grotto in business,” explains the photographer Simon Norfolk. But a few winters on the mountain have left the blanket in tatters.
“It’s the gesture that fascinates me,” says Norfolk. “There is something insane about trying to reverse the inevitable – a gesture as forlorn and doomed as the glacier itself.”
Norfolk and fellow photographer Klaus Thymann climbed up to the grotto just before dawn, armed with a light attached to a helium balloon that cast a sepulchral light over the scene. “I wanted to recreate the same light you get over a mortuary slab,” Norfolk says.
Emilia van Lynden, artistic director of Unseen Amsterdam, finds the effect as aesthetically chilling as it is beautiful. Of the whole series, called Shroud, she observes: “We’re seeing a glacier being wrapped and prepared for death.”
Deeper pleasures
“There’s next to no photo-journalism here,” van Lynden explains. “None of the images here expect you to take them at face value. They expect you to pay attention and figure things out for yourself. These are works into which you need to invest a little bit of time and effort, to see what the artist is trying to tell you.” ”
Read the full story here